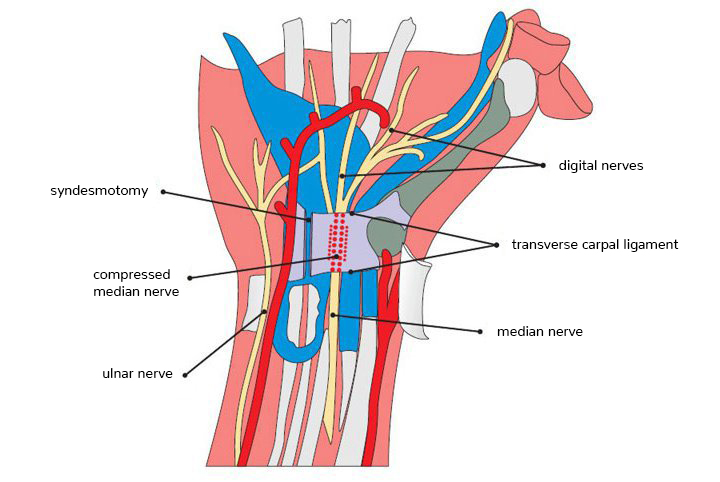 The pressure on the nerve can be felt at any time (traumas – bone fractures or dislocations within the wrist) or, more often – it can gradually increase. Certain concurrent diseases often result in CTS symptoms : hypothyroidism, rheumatic fever, uratic gout, diabetes. Pregnant or puerperal women very often report symptoms of the disease, which is due to retention of water in the organism or swelling of soft tissues. Certain inflammatory conditions, e.g. inflammation of tendons situated in the tunnel frequently result in compression of the nerve and development of the symptoms. The performed work connected with constant straining of the wrists, e.g. computer typing with bent wrists, or the, so called, monotypic activities connected with certain occupations result in developing the disease. It sometimes happens, however, that it is impossible to determine the source of the disease as it involves many aggregated factors.

Patients describe different symptoms occurring in their fingers: most often they speak about numbness and tingling. This group of symptoms doctors call paresthesias. Individuals also experience pain in the hand, growing at night or in the early hours of the morning and awakening them from their sleep. The symptoms are explained by increasing pressure in the carpal tunnel, which is higher at night when the hand remains bent for hours when patients are asleep. Other symptoms include loss of precision in operating their fingers – patients are unable to do up small buttons, e.g. in their shirts, pick up coins or pins from the table. They also report weaker gripping strength which results in their dropping plates, cups, being forced to stop writing due to growing pain in the hand. The symptoms usually develop in ring finger and then “spread” to the index and middle fingers, and at times even to the little finger. In advanced stages numbness and feeling disorders remain and atrophy of muscles may occur.

Examination and diagnosis of the disease

Information acquired from a patient during his or her medical appointment – taking medical history – are the most important in diagnosing the disease. History data pertains to symptoms, time of their occurrence, growth of their intensity, activities that might have caused them, occupation of the examined patient and concurrent diseases that might have influenced development of CTS and whether the examined patient suffered any trauma in the past.

The examining doctor can also ask question concerning the patient’s earlier treatment of his/her symptoms. Performing specialist diagnostic tests and examination of nerve conduction and carrying out EMG helps to confirm the diagnosis.

The treatment can be operative or non-operative. The choice of the method of treatment depends on the information acquired from a patient and results of medical examination and supplementary tests.
Non-operative methods of treatment include wearing immobilization-orthotics at night in order to avoid long bending. When the source of the disease is the inflammatory condition of the tendons it can be treated by corticosteroid injections (the, so called, blockade). They are used to reduce the inflammatory condition. After the non-operative treatment, the symptoms can often be relieved or completely disappear. In the case of persistence of the symptoms, their intensification or lack of effect after non-operative treatment, doctors will suggest operative treatment. It involves dividing the transverse carpal ligament in two, which relieves the pressure on the nerve by increasing the volume of the carpal tunnel. The choice of the operative technique depends on the decision of the consulting doctor. Any incisions are made on the palm side of the hand or wrist. The nerve can be released by one long incision (open technique – see photo 3), or one or two small incisions (the small incision technique – see photos 1 and 2). Endoscopic carpal tunnel release can also be used with a small endoscope (fibre-optic cable) to ensure precise release of the nerve from pressure. This allows the best cosmetic effect. 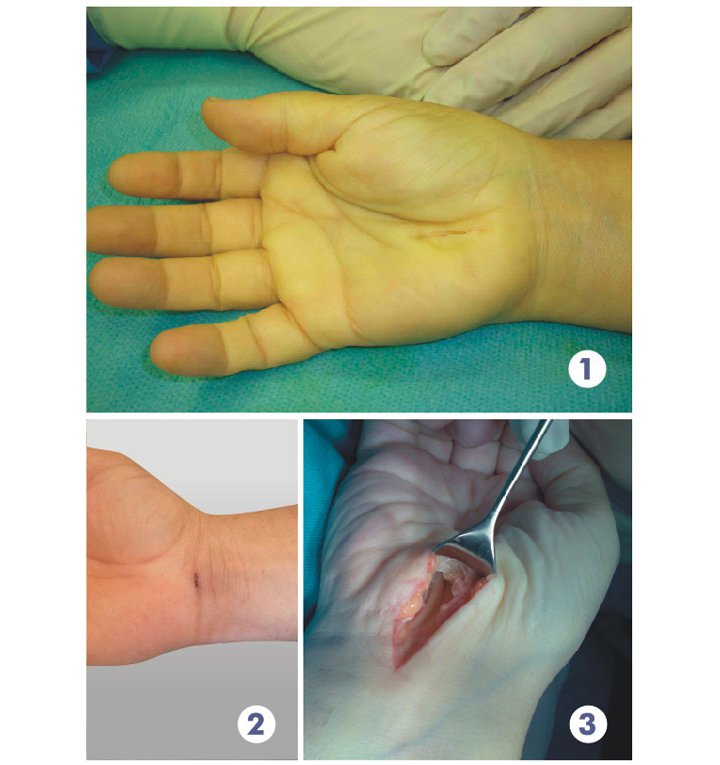 After the surgical procedure symptoms of the disease can subside immediately or a few months after the surgical procedure.
In the advanced cases of the disease, the patient can feel relief in the form of reduced ailment, though some of the symptoms, such as numbness of fingers, muscular atrophy can remain until the end of a patient’s life.
In some patient it happens that the symptoms of the disease may intensify / return, which is connected with concurrent diseases or the practised profession or, at times, for no apparent reason. Another surgical operation can be necessary in such cases. One should remember that the final effect of the treatment depends of the degree of development of the disease as well as on good cooperation between the patient and the doctor.